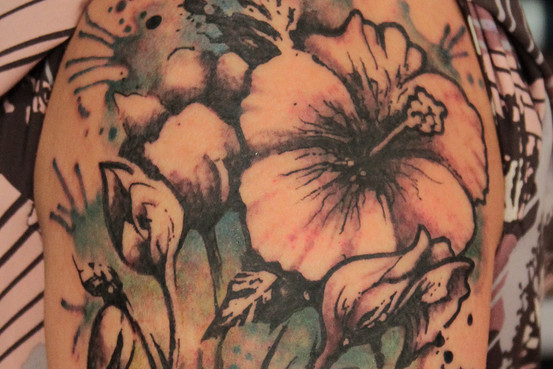 When customers eager to get inked walk into a Williamsburg or Greenpoint tattoo parlor with a design in hand, chances are the artist has seen it — or something like it — before.

So the busy Brooklyn tattoo artists profiled in the Journal Thursday admit tiring of trends like Chinese characters and Japanese lettering, getting a bigger kick out of inking customers with their own designs.

In an ideal world, artist Jeb Maykut would create designs for all walk-in clients at Flyrite Tattoo in Williamsburg. “It would be, ‘I want a rose,’ and that would be all the input. When you come and you see it, you say ‘OK, that’s great,’” Maykut says. “The worst client you can get is an art director in a graphic design firm, because, they’ll drive you crazy.’”

On a recent afternoon at Flyrite Tattoo, artist Maykut was working on a Japanese Hannya, or demon mask, for Milam Bostroem, visiting from Sweden. The traditional Japanese styles “make for really timeless tattoos,” says Maykut. “In 50 years, it’s not going to be a dated thing some tattoos are.” As an example, Maykut cites “the curse of the tribal tattoo,” a popular tattoo style in the 90s.

Right now, Gene Coffey, an artist who works at Tattoo Culture in Williamsburg, says he’s  seeing a lot of what he calls “American traditional” designs in the neighborhood: “Sailor kinds of tattoos. Big bold outlines, simple color palettes, the traditional rose tattoo. Then you also see a lot of Japanese stuff too.”

Ryan Roi, 25, an artist at Asylum Studios in Williamsburg,  says that right now he’s seeing a lot geometric designs, like triangles, and also “script, miles and miles of script.” But the creative people in the neighborhood are also open to tattooing out of the box and getting original pieces, he says.

“People try to be clever and ironic, but then you also get people that see some of my art and are into that, that’s the type of stuff I really enjoy doing,” he says. “There are tattooists and tattoo artists, and real tattoo artists want to do real art because they’re artists before anything,” adds Roi.

Amanda Wachob is one artist that blends both worlds, creating paintings that are often turned into tattoos, and tattooing canvases and fruit for her shows. Wachob runs a studio out of Williamsburg after leaving a tattoo shop in Manhattan. Now that she’s on her own, she says she can be highly selective about the work she does and tries to push for custom work.

As people start to understand what the artist is trying to achieve in their work, they “start giving you more freedom and leeway, they trust you and give you more control over what you do,” she says.

“It’s a craft,” says Saved Tattoo’s Scott Campbell. “It’s one of the last things that’s completely analogued. There’s no mass producing, you can’t order it on Amazon. It has a specialness to it that it’ll never lose.”

Replies to This Discussion